St. Elizabeth Ann Seton School focuses on the total development of the child within a faith‐filled community.

Two hundred years ago, Elizabeth Ann Seton founded St. Joseph’s Academy and Free School, the first Catholic School for girls staffed by the Sisters of Charity. A widow, Seton struggled through difficult years, converted to Catholicism and devoted her life to caring for the children of the poor.

Dedicated to following the will of God, Seton had a deep devotion to the Eucharist, Sacred Scripture, and the Virgin Mary. In 1975 she became the first native-born United States citizen to be canonized and is now widely considered the patron saint of Catholic schools.

Founded in 1999, St. Elizabeth Ann Seton is Elk Grove’s only Catholic School. Our school provides a faith-filled environment as well as a rigorous academic program in our preschool, elementary and middle school.

Elizabeth Ann Bayley, one of two daughters of a prominent Episcopal family, was born in New York on August 28, 1774. She was a charming little girl, small-boned and dainty, with great brown eyes. Having lost her mother at the age of three, she was deeply attached to her physician father and used to sit beside her schoolroom window watching for him on the street. When he appeared, she would slip out quickly and run for a kiss.

Beautiful, vivacious, fluent in French, a fine musician, and an accomplished horsewoman, she grew up and became a popular guest at parties and balls. Long afterward she wrote of all this as quite harmless, except for distractions at night prayers and the bother of fussing over dresses. Small wonder young William Seton fell head over heels in love with her. She returned his love adoringly and they were married, surely to live happily ever after.

It began felicitously enough in a gracious home on Wall Street, William busy at his family’s shipping business, Elizabeth with the beginnings of a family. Anna Maria was born, then young Willy, and then came a thin thread of worry in the form of William’s ill health. With the death of his father, their fortunes began to decline. William was tormented by visions of debtor’s prison, while Elizabeth was certain that God would help them to survive. “Troubles always create a great exertion of my mind,” she wrote, “and give it a force to which at other times it is incapable… I think the greatest happiness of this life is to be released from the cares of what is called the world.”

In two and a half years, they were bankrupt. Elizabeth spent that Christmas watching the front door to keep out the seizure officer. The following summer she and the children stayed with her father, who was health officer for the Port of New York on Staten Island. When she saw the babies of newly arrived Irish immigrants starving at their mothers’ breasts, she begged her physician father to let her nurse some of them since she was weaning her fourth child, but he refused. By summer’s end, he too was a victim of the yellow fever epidemic, and Elizabeth was grief-stricken. More and more she turned to the Scriptures and the spiritual life, and in May of 1802 she wrote in a letter that her soul was “sensibly convinced of an entire surrender of itself and all its faculties to God.”

Then in 1803, the doctor suggested a sea journey for William’s health. Against Elizabeth’s better judgment they set sail for Italy to visit their friends, the Felicchi family. To pay for the voyage, she sold the last of her possessions-silver, vases, pictures, all probably inherited from her father. The voyage was pleasant, but arriving at Leghorn they were quarantined in a stone tower on a cane outside the city because of the yellow fever epidemic in New York. There she endured for forty days the cruelest suffering she was ever to know, possibly the key to all that happened during the rest of her life. She wept, then reproached herself for behaving as though God were not present. She tended the racked patient, now coughing blood; amused Anna Maria, who had come with them, with stories and games; and held little prayer services. When the cold numbed them beyond bearing, she and Anna Maria skipped rope. William died two days after Christmas in Pisa, at the age of thirty-seven. Only the laundress would help the young widow to lay out his body.

While waiting to return to America, Elizabeth attended the churches of her Italian friends where she was deeply impressed by the Catholic belief in the real presence. If this teaching about the Blessed Sacrament had been held in the Episcopal church in New York at the time, Elizabeth Seton’s story might have been very different, for this doctrine was at the very heart of her conversion. Returning to New York, poor now and living upstairs in a little house supplied by friends, the news of her interest in the church stirred up consternation on all sides. She agonized with indecision about it until finally, on March 14, 1805, she became a Roman Catholic.

Several plans to support her family failed, and finally she opened a boardinghouse for schoolboys; but when her sister-in-law, Cecelia Seton, became a Roman Catholic also, her angry supporters withdrew. Hearing of her need, the president of St. Mary’s College in Baltimore offered her a residence with a teaching position in that city. She accepted and left New York for good on June 8, 1808.

In March of 1809, she pronounced her vows before Bishop John Carroll of Baltimore, was given some property in Emmitsburg, Maryland, and in June she, her three daughters, her sisters-in-law, Cecelia and Harriet Seton, and four young women who had joined them, began what was to become the American foundation of the Sisters of Charity. For special occasions they wore black dresses with shoulder capes, a simple white bonnet tied under the chin (like Elizabeth’s mourning dress); and for everyday they wore whatever else they had. Their temporary abode provided four rooms, two cots, mattresses on the floor under a leaky roof where in winter snow sifted down over them. Vegetables, now and then a bit of salt pork or buttermilk, and a beverage called carrot coffee was their fare-all flavored with that great zest for survival which had become a habit with Elizabeth. When they moved to their unfinished permanent home they were invaded by fleas which had infested the horsehair for the plaster. Finally the home was completed and they had “an elegant little chapel, 30 cells, an infirmary, refectory, parlor, school, and workroom.”

In 1811 Mother Seton adopted the rules and constitution of St. Vincent de Paul, with some modifications, and the institution, having received the sanction of the highest ecclesiastical authority, became a religious order. Afterward a group of buildings, embracing a residence for the Sisters, a novitiate, a boarding-school for young girls, a school for poor children, and an orphan asylum, was erected.

In 1814 Mother Seton sent a colony of Sisters to Philadelphia to take charge of the orphan asylum. In 1817, in response to another application from New York, another body came to that city. At her death there were more than twenty communities of Sisters of Charity, conducting free schools, orphanages, boarding-schools, and hospitals, in the states of Pennsylvania, New York, Ohio, Delaware, Massachusetts, Virginia, Missouri, and Louisiana, and in the District of Columbia. Although, according to the constitution of her order, no one could be elected to the office of mother-superior for more than two terms successively, an exception was made in her favor by the unanimous desire of her companions, and she held the office during life.

Elizabeth Seton died slowly and painfully of the tuberculosis which had stricken all her family. At the last she was sustained on nothing but a little port wine. She had written to her best friend not long before, “I’ll be wild Betsy to the last.” The night of her death, January 4, 1821, she began the prayers for the dying herself, and one of the sisters, knowing that she loved French, prayed the Gloria and the Magnificent in French with her. The spirited young woman who had wanted only to marry a handsome man, be a happy wife, and raise a pretty family, had had adventures beyond her wildest dreams. Loving by nature, she grew in faith and hope because of trial, not in spite of it. And with each trial God revealed resources, strength, and courage she did not know she possessed.

Mother Seton was canonized the first American-born saint by Pope Paul VI in 1975. 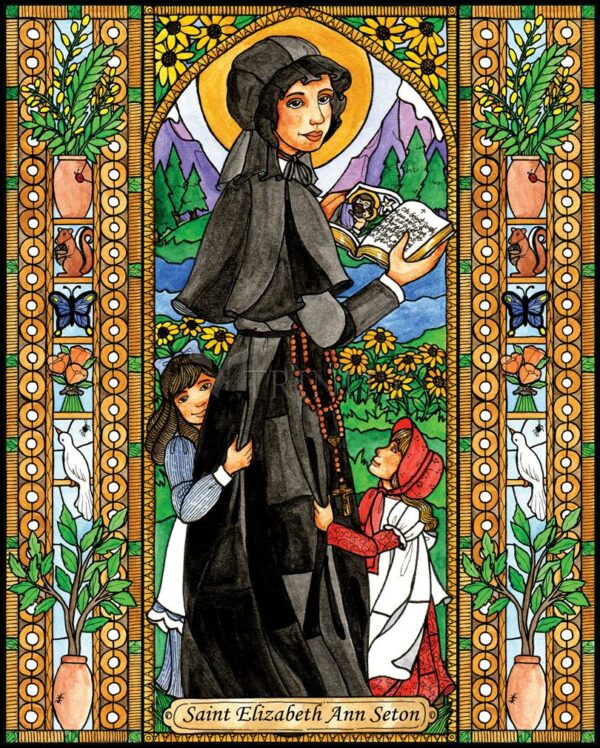 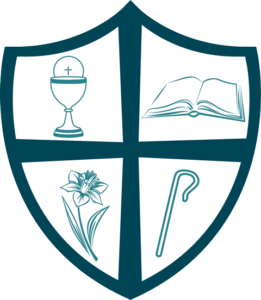 St. Elizabeth Ann Seton Catholic School is an educational ministry which passes on the values, traditions, and teachings of the Catholic Church and builds a community of faith, family, knowledge, and service.

St. Elizabeth Ann Seton Catholic School creates a nurturing environment where each student is given the opportunity to grow in faith, knowledge, and character within a Catholic community.

We recognize the individuality of each student and partner with in the care and formation of their children. Together, we set high standards for all learners, facilitate academic development, and encourage students to strive for their personal best.

As Catholic educators, we foster a desire for life-long learning and the achievement of excellence. The educational and spiritual environment instills integrity, self‐worth, and the dignity of all individual and an acceptance of others. Ultimately preparing our students to be Christian witnesses and to actively live their faith.

Recited as a school family each school day during morning assembly. 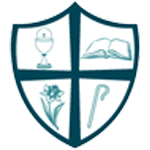